Which Animal Gets Your Vote? 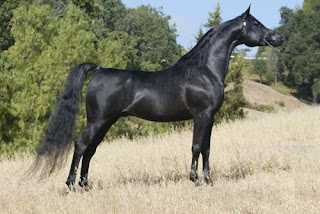 Dear Friends, the time has come for me to pose the ultimate question, the one that people have avoided asking for centuries. Please don't be put off by my asking but, given Iran and Bushco, it simply can't be put off any longer!

I refer of course to your choice for which animal should replace humans at the top of the tree when the next war, a nuclear one, ensures that they depart this earth never to return. Yeah!!!!!!

Now my choice is the horse. The horse has carried ignoble man on its back for thousands of years despite the fact that the horse is a noble animal, one which has not always been well-treated by its two-legged master. I still remember crying over Black Beauty at a child.

The horse has been used and abused by man constantly. Without complaint, it has carried bloodthirsty men into battle and suffered greatly from the savagery of hacking swords and piercing arrows and cannon balls. Once knights jousted on armour-clad horses. Horses have dragged heavy artillery pieces all over the countryside so that silly men could blow each other to bits. They have been ridden into perilous situations as "Into the Valley of Death rode the six hundred," demonstrates. They have born witness to the witlessness of mankind without complaint.

They suffered badly when the motor car came into existence and they were brushed aside by callous men, put out to pasture or unceremoniously sent to the glue factory. Surely it is time to finally reward horses for their years of service to the catastrophe that is man by voting for them to succeed man.

Imagine a world without humans but filled with magnificent beasts like the one shown in the photograph. They would not defile the earth or engage in the weird proclivities that entertain most humans. They would not kill other creatures but would roam free, majestic as eagles.

My vote is for the horse. What's your choice?

P.S. Please don't nominate any member of the ape family for fear that man might re-evolve!

It's not my choice but when there is nothing else, living, crawling out from under a rock will be a pair of cockroaches.

Nothing very majestic about roaches, Granny but if that's your choice!

That post wasn't seeking utopia, it was denying utopia. Not a time for cynicism.

On the contrary, it's very much a time for cynicism, Renegade!

You will recall in Book IV of Gulliver's Travels that Gulliver comes to the same conclusion as you, Daniel.

Along with granny, i have heard that the only creatures that will survive a nuclear war would be the cockroach. If the choice was mine i would go for the graceful and helpful dolphin. I think they probably made a good choice returning to the sea rather than stay on land with us.

Purely for fun, as this blog is meant to engender, i would vote for the dolphin. At least as intelligent as the human, but much more caring. If the dolphin is in charge while the earth recovers from the rape and pillage of mankind, perhaps a future humanoid lifeform may evolve. Who knows, perhaps by then my molecules will have rearranged themselves in such a way that I will be one of the researchers who discovers the lost civilization of western man. What a trippy question. Thanks

I nominate dogs and cats for the top spot. They already run my household, they might as well run the world. (They would do a better job of it than the animals currently in charge. Long naps every day, treats for everybody, take time to smell the roses and roll in the grass...)

I could live with horses at the top, though.

I have a friend with a horse that looks just like that Black Stallion.

Since Bush is the biggest danger to ending it all and since according to Vicente Fox of Mexico "Bush is afraid of Horses and is a Phoney Cowboy " (just like his dad too) I second the Horse.

Ninglun, you forgot to indicate your choice!

Problem with cats and dogs is that they would fight, Bluegrrrl, with cats coming off second best. Sereket wouldn't be pleased!

Jim, welcome and thanks for your contribution.

I still vote for humanity, Daniel. Partly because I am human; partly because there is still enough decency, love, and compassion in the world to encourage us to keep hoping.

If only decency, love and compassion were values embraced by those who control the destiny of our world, ninglun!

They fail us and we, the people, fail ourselves.

I would love to be a dolphin. They deserve to run the planet.
Douglas Adams thought they were the second most intelligent species (after the mice, of course)

They aren't perfect, but they are beautiful and they manage to live in their environment without screwing it up.

I can't remember where I read it now, but a very clever man did say, that in spite of a nuclear war which would kill mankind effectively, the same would not happen for "lesser" species.

He tells us that although they may be affected by nuclear fallout, it may not be fatal in the short term. Because ignorance is bliss in this case, he tells us they'll live much happier, if shorter lives, precisely because man is no longer a threat to their wellbeing.

I sort of liked his theory because man has created the environment not only of nuclear devastation but of global warming.

I believe the earth will survive nuclear war, as a stumbling block to overcome, before nature reclaims her rightful place of superiority over mankind.

The earth will force us to humble acceptance of her power one way or another. That whale meat is poisoning people - because of its pollution from heavy metal in the sea. We deserve what's coming!

Why not a Jackass since that is what we have become for not rising up to stop the slaughter of our freedoms.

Nancy, Mary and Larry, thanks for calling by and offering your thoughts. This post, while it may appear to be lighthearted, is aimed at people like you who have intelligence, who have the knowledge and the maturity to see and understand the serious position our world is in.

What about the tiresome tyre kickers, the blogging low-life? Well, I guess there's no real hope for them anyway!

Wise, generally quite gentle, beautiful for their own type of "humanity" that they display towards their kind.

Research shows the mourning and compassion that elephants display at the passing of one of their herd.

Special nod to Dolphins in there too.