You Can't Have It Both Ways, George! 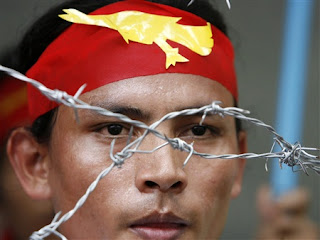 Friends, headlines on the television and the internet today shrieked "Bush leads condemnation of Myanmar Brutality." On the surface most people would agree that his action was good and right and proper and say, "Well done, George!"

Now call me old-fashioned but I would've thought that brutality was brutality no matter who perpetrated it and that the killing of people is to be condemned no matter who does it.

Surely, the firing of live weapons at unarmed civilians and Buddhist monks by the military junta in Burma (Myanmar) which resulted in an unknown number of deaths plus the beating up of civilians and monks with batons is no worse than the firing of missiles into the Palestinian Territories by the IDF or using tanks against stone-throwing boys or Israeli snipers targeting Palestinian children or the collective starving of the Palestinians or the complete restriction of their movements or the demolition of their homes and the taking of their land and the keeping of their taxes...

As well, George's soldiers, who invaded and occupied Afghanistan and Iraq (on a false pretext), have been killing and wounding their civilians for a number of years now (some say more than a million Iraqis have been killed thus far - see the tragic photograph in the Holocaust post). Surely the action of the Junta is Burma is no worse than America using depleted uranium explosives in Iraq and Afghanistan as well as cluster bombs and rendition and torture and missiles and home invasions and phosphorous bombs...

I may be wrong but it seems to me that there is a profoundly hypocritical double-standard here.

No good has ever come from either of them, nor peace!

The present American and British administrations have no moral rights to bash any other Government over the head for their actions. You cannot condemn someone on the one hand while being guilty of much worse yourself.

There are no 'Good Guys' in the world anymore, Lucy, just a cabal of greedy, brutal, amoral opportunists!

I am no longer shocked by what humans have done and continue to do to their own kind, Monica.

The Goya post gives us two different views of humans. Which is the right one?

But George does have it both ways! He neither cares nor understands any other cultures or belief system other than his own.

As a private individual no one would give George Bush the time of day to engage him in meaningful dialog, because he can't grasp the concept that his view is just one of many in the pie of world politics.

Unfortunately as the President of the United States of America, his views count, because to be seen as disagreeing with him is likely to see you incarcerated as a terrorist suspect or a traitor to America.

And precisely because it is America, they can scream at one Power they disagree with, while stroking the fur of another with equal human rights abuse!

I believe it is part of the requirement to use airports within coo ee of their intended next target..oh, and of course retaining Israel with its weapons of germ warfare within reach of all those oil rich countries of the Middle East!....

Ah, Mary, if only the bulk of humans in this world had your insight, your perception, then dangerous bacteria like George could never get out of the cesspool! Cheers.