INCESTUOUS LOVE - SHOULD IT BE LEGALISED? 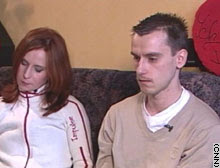 According to CNN today, the couple shown in the photograph are brother and sister, and have had four apparently normal children (read the full story on CNN). The brother has done jail time for the relationship and some of the children have been taken by the State. The couple, despite much hostility, are trying to have such relationships, which have been thought of as taboo for centuries, legalised as they are already in some European Nations.

What do you think about this issue? If gays eventually get legal rights to marry, why not siblings? Why shouldn't mothers be allowed to marry their sons or daughters?

Should a line be drawn in the societal sand or does anything go these days?

UPDATE: It seems that two of the four children have disabilities according to the latest news I've seen. That surely makes the situation clear: let siblings have relationships if that's what they want but kids are a no-no!

The Future Was Yesterday said...

Take a year's sabbatical in W. Virginia, USA, then come back and see if you can answer your own question.:) Seriously. I really thought the evidence already proven, was so overwhelming, this was a non-topic. Apparently CNN's ratings are slipping.

I feel crushed, FWY. I'm so out of touch it seems. Next you'll tell me that humans are marrying dogs and goats and rats and their favourite slippers...

i have an idea of a response- but i am no good until i have my morning cuppa- which i have not done. that means incoherent rambling- so i will be back :) i hope that isn't viewed as a threat :)

I think you're comparing apples to oranges, so to speak....

Comparing gays right to marry vs. brother and sister is far reaching and damaging.

I thought it was banned because of the undeniable risk of abnormal children. Hardly in the league of gay sex.

Didn't take long for the WV jokes did it, being that I am an amateur genealogist finding relatives married in your family tree will be more common than most suspect. Skeletons are in everyone's closets regarding Kin Marriage. Plus given the fact you only have to go back 50 generations before we are ALL KIN adds another dimension to this fact.
Royalty has married brothers and sisters, half sisters and half brothers since before recorded history. Personally I think it an influence of 'alien' intervention, and poor Oedipus Rex and Freud.. but recent research shows that the "Disgust" factor has to do with how much time is spent in the same household as children,, which determines an eekkk! factor when one wants to kiss a sibling. This CNN report is from Germany (I don't think it had to do with slow news days) and nothing was said regarding how they were raised, together or not. The Genetic factor is 50% chance of having children with severe problems at birth if you 'do' a sibling. I would assume the same for the mother/son question too. Many of these issues are societal, which funny enough the Judeao-Christian and Muslim patriarch Abraham was married to his sister (half?) so they have no religious rights bitching about this issue, but I can see how genetically it would be an issue. Personally it is a NO for me, and sadly I was not surprised to see this issue next, following the gay post,, because so many people equate homosexuality with pedophiles and incestous relations like they are identical, when they are no where the same as issues go.
Again, if they were not having children it might be different,, if they were raised separately, and didn't know till later,,,, still it is repugnant to most, Me Included, and I would have had to tell sis "sorry, can't do it" I think Anthropologically it is an interesting question why in the past Royalty thought it was the only way to go,, besides the keeping it in the family jokes.
Tough question Daniel, now with better DNA tests available more marriages may be at risk (finding out they are kin) than ever thought.
One question,, why is it acceptable to marry cousins? Most society's,, ours here in America and yours too have always allowed this???

I believe, Scott, that the risk of abnormalities is very low if cousins marry. And I have to say that, until now, I have never heard of siblings marrying! Australia must be backward. Or is it forward?

One thing that intrigues me about the interesting topic of human relationships and the variations that exist is the attempt by some to put one of the varieties in a 'Don't Touch, Don't discuss' category. I would've thought, to educated, questioning people, that all subjects should be open for discussion WITHOUT exception.

Once, not that long ago, homosexuality was taboo and a criminal offence. Now it seems that, for some, it's taboo to discuss it let alone to mention that it might have any negative aspects.

How has this complete reversal come about? Why are women so pro-gay? Why don't straight men say much on the subject? Interesting questions. Any answers?

Of course royal families have been marrying cousins for years, the Queen not excepted...

Whether this is an argument for or against the topic, I am not sure. ;)

Just for the record, Scott, Prophet Abraham (peace be upon him) is not narrated to have married his sister (half or full) in the Islamic tradition. That piece of folk lore is from the Old Testament, which incidentally also narrates that the daughters of Prophet Lot "lay" with their drunken father, in order to become pregnant.

That kind of behavior is not befitting of any man, never mind men of God. There are no such stories to be found in the Islamic traditions.

Ninglun, I'm a bit of a breeder myself (cattle that is). You watch carefully that you don't mix the strains if you want best results. Royalty seem to have their own rules.

IMulim, the thought of daughters 'laying' with their drunken father is rather disgusting. But who am I to say? The line in the sand keeps moving! Cheers.

I just feel that an anaology to gay marriage and incest was irresponsible. I agree we all have our own views, but I just don't happen to agree with you this time if this is what you were trying to do.

Diversity is the key to survival. Whether this genetic diversity is expressed in crops, herds or humans.

Even african tribes realize how important it is to have "new blood" in their tribe, and many isolated tribes regularly go to annual mate selecting events where other isolated tribes also participate.

So there is the recognition that genetic diversity is a healthier situation for a given population's progeny.

So, close interbreeding though it may not result in birth defects, certainly presents a higher risk.

On the other hand, homosexual incest between consenting adults does not present a genetic risk. Can't say I am terribly in favour of the idea, but I suspect that is the effect of my cultural conditioning, rather than any other scientific reason.

Homosexual "marriages" aside as a different issue, I instinctively oppose laws against brother/sister marriages, whether official or "common law". I don't have a sister, but I've wondered how attractive siblings of diffrent sexes can be indifferent to one another physically. I don't think that society should take the role of officially punishing brother/sister couples, although for genetic reasons incest ought to be discouraged.

No, please feel free to disagree with me on any topic. I do not claim to have a monopoly on truth and, in my own mind, I have more questions than I have answers.

Beep, lovely to hear from you. Your comment, as usual, was carefully considered.

Fleming, the question of what constitutes an acceptable human relationship, once clear, seems to be in a state of flux. To me, either the whole complex question of relationships is up for discussion or none.

in regards to your question about why women defend homosexuality- not sure but it probably has to do with protecting the weak- so to speak. gay folks have traditionally been the underdogs in society and i think on a certain level- women feel a kinship with them as a fellow oppressed group. now that women aren't quite as oppressed and repressed- they look out for gay folks. i think hetero men don't talk about topics that could be seen to emasculate them. they tend to be very proud of their manhood.

as for the whole layin' with the sib thing- nah. i am going to say that 2nd cousins are as close as i would ever go. the folks before me have done a pretty good job with the genetic thing- and you mentioned the 'ewww' factor and whatnot. although, the ancient egyptians married siblings. i still don't think modern societies should allow it. we have very different family structures now.

Great comment, Betmo! It contains a lot of truth.