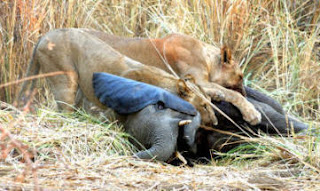 The photograph shows two lions eating an elephant calf. Though this may offend some, lions are instinctive killers who hunt and kill for food to feed themselves and their cubs. However, on the positive side, they do not engage in mass killing of other animals or their own kind! And, in the wild, lions do not exhibit aberrant behaviour such as males seeking to mate with other males. Despite their faults, we accept lions for what they are. We even call them the King of Beasts!

If we wanted to radically change the behaviour of lions, turn them into passive, harmless creatures like cows, how would it be achieved? Certainly sending them to school for years wouldn't seriously change their instinctive or learned behaviour. Sending them to Church would have about the same effect. Putting a pride of lions in a paddock with a herd of cattle wouldn't achieve much either except to quickly end the herd's existence. Probably the only way we could radically change the lion's behaviour would be to engage in dramatic genetic engineering. Of course, if we did manage to create a passive, harmless lion that was a herbivore, it could be argued that the creature would no longer be a lion.

Now, humans are instinctive killers too. They also hunt and kill other animals for food. But, unlike lions, they DO engage in the mass killing of other animals AND their own kind. As well, all too often, they engage in 'aberrant' behavior like murder, rape, incest, domestic violence, child molestation, drugs, unnatural sex, torture, etc. No amount of education, evolution, deductive or inductive reasoning, religion, inspiring blog posts, toilet training or expensive deodorants, etc, has lessened the aberrant behaviour of most humans or their instinct to kill.

The moral of my post? If we want to live in peace and harmony on earth the only way to achieve it that I can see is to carry out drastic genetic engineering on the entire human race, make us into another creature entirely!

I've really missed you too and it's great to see you still leading the battle against injustice or asking the hard questions.

Well, Daniel, that would be one noble use for genetic engineering technology!!!

Although I have thought about this question a lot...are humans really instinctive killers? Are sexual and physical violence hardwired into our DNA, or are there other reasons for those behaviors?

Because humans were "blessed" with cranial power, somehow I always expect more from us...in spite of the overwhelming evidence to the contrary...

Was going to drop by with the URL to my new blog, but I saw that you found me first! Thanks for stopping by!

Zoe, great to have you back. Asking the hard questions is hard because the answers you get are often difficult to accept. Hugs. XXXXXX

Bluegrrrl, you too are back. A double win for the world! Unfortunately, I have concluded that we humans are hardwired killers. The evidence: millenia of perpetual war and brutality (to say nothing of deviance)!

I think humans are just a flaw of nature! We think of ourselves as "evolved" species, but we are just cancerous cells!

May a nice cosmic radiation get rid of us all from the universe!

My opinion of humans doesn't rate too highly either, Naj. I think we'll provide our own radiation or at least George will!

:)
Daniel, I think this may interest your wit!
by Tony Karen

And what will you do when the indigenous people of Africa, and corresponding northern Laplanders, and native Pacific Islanders, vow to resist your Western-generated idea to impose upon them a form interference and, in effect, imperialist (for its forced designs) genetic engineering?

If they vow to resist forced "drastic" re-engeenering with all their might, and promise resistance when you enter their domain, what will you do?

Make them submit, by using force?