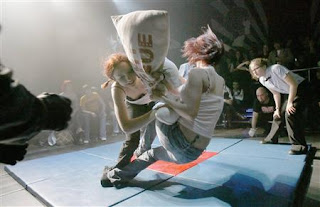 This photo from Reuters, the world's best news source, shows a new craze which has hit Toronto in Canada. It's called pillow-fighting and, though we all did it as kids, it is now an attraction which brings eager women contestants who try to beat up on each other to the cheers of ever-increasing audiences. The winners get cash prizes! The people promoting it hope to form it into a League which eventually may rival the Stanley Cup (an ice hockey tournament which involves Canada and the U.S).

Now my quirky mind, upon seeing this photograph, looked for other possibilities. Bear with me for a moment: could you imagine Bush and Armadinejad going hell for leather instead of the two girls?

Well, all right, I concede that it requires a bit of a stretch given Bush's cowardly nature but surely it's better than the two of them beating up on each other with nukes? What about Chavez and Cheney then? No! Of course, Cheney has a dicky heart! Some unkind people think either he's got no heart or the heart of a Rottweiler. Well then, how about a scantily-dressed Rice and Clinton (the Hilary part)? Now I can tell you are beginning to warm to this idea.

Once the idea took hold, we could get rid of all weapons, the whole bloody lot! If there was a confrontation, say between Olmert and the leader of Hamas, a neutral referee could be appointed, say an Eskimo or a Hottentot, an area could be cleared, pillows checked for suicide bombs or American missiles or Bibles or Korans, then, when the bell rings, out they come swinging. The last man standing is declared the winner and, as we all know, to the winner go the spoils.

Folks, my idea could save our world from extinction. I wonder should I patent it?

As has been said many times before in life, if the people who wanted to start a War, had to fight, who would stay and who would "cut & run?"

We all know the answer to this ; (

Always a great idea though! I wouldn't go for the pillows, let them fight it out like they make others do for them!

What about Chavez and Cheney then?

You know, though this may be a bit on the violent side, how about bringing back dueling? At least it reduces the multi-national to the personal. I can picture in my mind's eye Cheney and Chavez facing each other with pistols at twenty paces. Of course Cheney would probably shoot is second.

And BTW, before I forget my manners, many thanks for rolling Blognonymous. I've added Seeking Utopia to my own roll.

Beats the heck out of 3,000+ dead sons and daughters of America and god alone knows how many Iraqis (the govt numbers do not match the human rights orgs figures).

Poor 3000+ dead sons and daughters! I love it when Americans lament their dead soldiers. Enjoy the power, enjoy being the most powerful country, but dont want to pay the price? 3000 soldiers is a small price to pay to "protect your interests" in the middle-east (clue: OIL). Now, hop on your Hummer and make that trip to the war memorial.

I guess those whose sons and daughters have died do lament. For those who profit from war, it's just a cost of doing business and making a profit. A very large profit! Cheers!